The Allen Americans finished a three game sweep of the Wichita Thunder yesterday afternoon with a 4-3 overtime win before a crowd of 1859 at the Allen Event Center (AEC). The game was totally different than Allen’s wins on Friday and Saturday. Wichita had a combined total of 45 shots in the first two games and almost matched that on Sunday afternoon with 43 shots.

– Allen got off to a good start scoring first when Collin Shirley scored his first professional goal just 71 seconds into the game. The teams swapped goals all through the game with Allen taking the lead and Wichita coming back. Allen was out shot 33-12 in the first two periods and Wichita was controlling the game with puck possession until the third period.

– Special teams dominated the game with five of the seven goals scored on the power play, including the overtime winner. Allen took a 3-2 lead in the third period on the power play goal (Les Lancaster) but Wichita came right back with a power play goal of its own to tie the score 3-3 and send the game into overtime. Just 52 seconds into the overtime, Wichita was called for too many men on the ice. That created a 4-on-3 power play for the Americans which they converted when Spencer Asuchak scored his second goal of the game and 18th goal of the season on a great pass from Matt Register who tallied his 39th assist of the season. Register is now second in assists overall in the ECHL.

– Here is the game recap issued by the Allen Americans:  https://allenamericans.com/media/game-recap/americans-sweep-wichita-after-overtime-win/

– Here is Wichita’s take on the game:  https://www.wichitathunder.com/en/news/allen-wins-in-ot-vs-wichita-on-sunday-afternoon

“It is always good when a team doesn’t play its best but still finds a way to win.”

“We didn’t play well the first two periods and Wichita had the better of the puck possession.”

“Jake Paterson was our savior until we got going in the third period.”

“Wichita’s power play goal to tie the game 3-3 was just a good shot that went in a tiny hole. There was nothing wrong with our coverage on that play.”

“Matt Register makes a lot of plays because he has such a long reach and knows how to change the angle of his passes to avoid them being blocked. It was a great play for the game winner from two veteran players in Asuchak and Register.”

“We have been playing with 12 rookies, 10 of which were not with the team at the start of the season. The team is going to get better over the final month of the season.”

“What happened with the jerseys is everyone was having trouble with the color combinations. We all (Allen, Wichita and on ice officials) agreed it was best to make a change. Our regular jerseys were easily accessible while Wichita’s were already packed away so we made the change.” 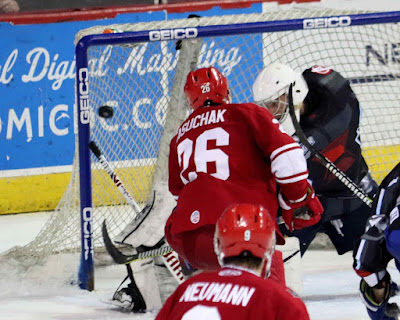 – Justin Kaplemaster had his first AHL start yesterday and led his Cleveland Monsters team to a 3-2 win over the Texas Stars. Justin stopped 30 0f 32 shots and was named the #2 star of the game.

– With the weekend sweep of Wichita the Americans have closed the gap to second place in the conference. Fort Wayne has expanded it lead on first place primarily playing against Wheeling. The Komets have played the Nailers in seven of its last nine games. Fort Wayne has won eight of it last 10 games. Here are the points percentages for the top four teams in the Western Conference:

– I have received several questions I haven’t answered. Haven’t forgotten about them, will get to them in the blog tomorrow. As always thanks for the questions.