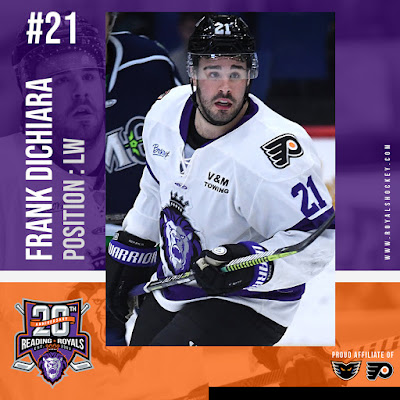 Steve Martinson is the reigning ECHL General Manager of the Year and has always been known as a great recruiter which is a lot easier with 10 championships on his resume. Martinson used those skills again to sign forward Frank DiChiara who played in Reading last season and was the first player to sign with Reading for the 2020-21 season. It would have been his third year in Reading but the Royals opted out for this season thus making their players free agents. Coach Martinson has had interest in DiChiara for a while but circumstances didn’t work out until this week. I am sure it helped that Corey Mackin, a teammate in Reading last year, had signed with Allen and was the Americans leading scorer. Last season DiChiara was Reading’s top scorer with 59 points (22G, 37A) in 59 games and Corey Mackin was Reading’s second leading scorer with 46 points (20G, 26A) in 58 games.

Frank is a 27 year old fourth year pro who grew up in Ronkonkoma, New York, a city of about 19,000 on Long Island. He is a left shot forward that is 6’1″ and weighs about 235 pounds. An only child, one thing that comes through in all of the stories you read about Frank growing up is education and school work always came first before hockey and baseball.  DiChiara played junior hockey in the USHL for Dubuque (2012-13) where he won the USHL championship (Clark Cup) and scored the winning goal in overtime in the championship winning game. Always a great student, DiChiara originally committed to Princeton but switched to Yale when he was in Dubuque. He earned a political science degree at Yale, his thesis was on the United States influence on Afghanistan. Obviously he has options other than hockey with his education.

As I researched many stories about DiChiara there was a consistent theme that came through all of them. He is almost always the smartest guy in the room but he doesn’t act the part. A natural leader, a big, gregarious, fun loving guy who cares about others. Here are just a few quotes that explains the type of player and person Allen has signed.

“That first summer in the gym I really saw his drive to succeed and that’s when I knew in my heart he would be something special. He was always willing to do something extra. Every other night he would hit 100 pucks off the blacktop driveway at his net, building up his arms…and destroying my stockade fence that was behind it.”…..Ernie DiChiara, Frank’s Dad

“Frank is an unreal teammate always making everyone laugh and always has energy, like the Energizer Bunny! If someone is down, he is right there trying to help out in any way he can. He looks at the positives and the bright sides of everything. Every team needs a guy like Frank.”…..Jarrid Privitera, teammate

“Frank plays a solid 200-foot game, as evidenced by his Defensive Player of the Year award at Yale. He has size, shoots it very well and can play the point on the power play. He is a proven winner, as he won championships in the USHL and NCAA ranks.”…..Jamie Russell, first pro coach in Worcester

“Frank was arguably one of the best power play guys in the league last year where he played the Ovechkin spot on the back door and just continued to get better. He is a great person and great in the locker room. You pull for guys like that. We had a top five power play and he was a huge reason for that. Credit to Frank, he put in the work to get better and you hope you see a guy like that get an opportunity at the next level at some point.”…..Kirk MacDonald, Reading coach

“That degree will always be there for me. As long as I don’t get too banged up, I’m going to continue to play and see where it takes me”…..Frank DiChiara

– Here is a story from 2013 that tells the life story of Frank DiChiara titled, “Becoming a Champion” that has many photos. A good way to get to know Frank. This story is on a blog site so you may have to scroll down a couple of stories to find the one on DiChiara. https://aepoc.wordpress.com/2013/05/28/frank-dichiara-becoming-a-champion/

– Here is a recent interview with DiChiara after he was the first player signed by the Reading Royals for the 2020-21 season before they opted out. If you have trouble opening the video it can be found on YouTube, “F Frank DiChiara first to sign for 2020-21.”

Frank also has what I saw described as a near photographic memory and is a stats geek that will know all of the Allen stats for the season off the top of his head. Hopefully one of the players tell him to follow Allen Americans Blog and ECHL Stats on Twitter and/or Facebook as Allen stats geek is a moniker we have in common.