A Disappointing Loss and Series, Looking Back and Looking Ahead, Former Ice Angel Brooklyn Rivera Crowned Mrs. America and More

A Disappointing Loss and Series, Looking Back and Looking Ahead, Former Ice Angel Brooklyn Rivera Crowned Mrs. America and More

Some losses are more disappointing than others and for me the 6-4 loss the Allen Americans suffered at the hands of the Rapid City Rush last night before a COVID sellout crowd of 2185 at the Allen Event Center (AEC) is disappointing on several levels.

– After so much time on the road the return to the AEC for 19 of the next 22 games was seen as a time to move up the standings. Instead Allen lost the first series of the long home stand to a team they were expected to beat. The Americans lost two of three games to the Rush. After two shutouts in Tulsa last week the Americans have allowed 18 goals in the last four games, an average of 4.5 goals per game.

– You can blame the recent injuries and call ups but the fact of the matter is Allen has been no better than a .500 team going all the way back to New Year’s Eve. Since January 31 the Americans record is 10-10-2-0. How bad is a .500 points percentage? Last place Rapid City’s point percentage after beating Allen two out of three games in this series is now .512. The old saying you are what your record says you are speaks loudly. Overall the Americans point percentage is .622 and good enough for third place in the Western Conference but they have to start playing better if they expect to contend in the playoffs. If Allen continues to play .500 hockey the playoffs could be in jeopardy.

– The game last night had plenty of disappointment starting with another loss after a good start. Allen’s record when scoring first prior to last night was 18-4-1-0. Allen scored first in both losses to Rapid City in this series. The Americans took a 1-0 lead in the first period but Rapid City tied the score just 36 seconds later and took a 2-1 lead with another goal with 20 seconds left in the period. To their credit the Americans did come back to tie the score in the second period after falling behind 3-1 but could never take the lead. The Rush took a 5-3 lead midway through the third period. Allen scratched back with an extra attacker power play goal to make the score 5-4 and appeared to tie the score less than a minute later but the goal was disallowed for goalie interference. An empty net goal by the Rush made the final score 6-4.

–  Goal scorers for Allen were Frank DiChiara (1), Les Lancaster (10,11) and Josh Lammon (10). Here are the video highlights from the Allen Americans YouTube Channel:

– Here is the game recap issued by the Allen Americans: https://allenamericans.com/news/general/americans-drop-final-game-with-rapid-city-6-4/

– Here is the game recap issued by the Rapid City: https://www.rapidcityrush.com/en/news/2021/3/rush-win-rubber-match-behind-sturtz-and-coulter

– One bright spot in the loss last night was special teams. After 23 power play opportunities at home without a goal, going back to the beginning to early February, the Americans cashed in when Les Lancaster scored a power play goal late in the third period. The home power play percentage creeped above 10% (10.9%) bit is still the worst in the league. The penalty kill was perfect again (0-3) and didn’t allow a power play goal in the three game series against the Rush (0-13).

– With Rapid City in the rear view mirror the Americans now look ahead to next weekend when Utah comes to town. The team will finally have a few days to get in some much need practice time. Also, two new forwards arrive today with the hope their play making skills will help. The two were teammates in juniors (WHL) and college. In their last year in the WHL they combined for 138 assists and 191 points. This reminds me of 2015-16 when two college teammates and friends (Thomas Carr and Jordan Rowley) came to Allen after their collegiate season was over and helped the Americans win the Kelly Cup. They were defensemen and the two arriving today are forwards but a lot of similarities.

– You can be sure the two players arriving today will not be the last roster changes. Allen has already used 43 different players. There will be well over 50 (a record) by the end of the season. In these times more than any, if Martinson does not try to improve the roster, if he doesn’t have the attitude if you are standing still you are going backwards, it will get worse rather than better.

– I have said this before but it is worth saying again after watching the games against Rapid City. How have Les Lancaster and Samuel Laberge not been asked for by one of the 28 AHL teams playing this season. Lancaster is on pace to score 20 goals which hasn’t been done since Stepan Falkovsky had 21 goals in Adirondack in 2016-17. Before that you have to go back to the 2011-12 season to find a 20 goal season by a defenseman. Laberge has 23 points (10G, 13A) in 31 goals but does so much more. He doesn’t take a shift off, works tirelessly and finishes every check. Both of these players deserve a shot in the AHL even in this weird pandemic season when finding the best players and winning isn’t the goal. In my opinion, players like Laberge and Lancaster are better than many of the prospects playing on AHL teams.

– Congrats to former Allen Ice Angel and Americans front office employee Brooklyn Rivera who was crowned Mrs. America last night in Las Vegas. To know Brooklyn is to love her. A talented and engaging mom of four and entrepreneur who is a friend to everyone she meets. If you have followed Brooklyn’s journey you know how hard she has worked and the sacrifices she has made along the way. She finished as the first runner up the first time she competed for Mr. Texas but went back and won on her second try. The Mrs. Americans Pageant was delayed earlier this year because of COVID which meant a few more months of clean eating and rigorous workouts. It all paid off in a big way when Brooklyn was crowned Mrs. America last night. Congrats again to Brooklyn, her husband Eddie and the entire family. Here are a couple of photos of Brooklyn from the archives circa 2015: 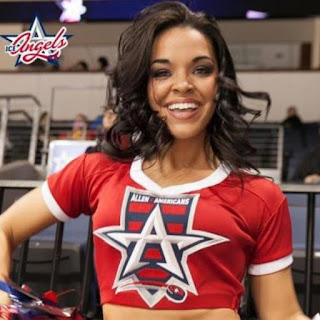 DID YOU KNOW: The number of players playing at least one game for the Americans for each season since they joined the ECHL: