I want to start today with Coach’s Corner because Steve Martinson’s comments this morning set the stage for the three game series against Wichita with games tonight (7:05 pm), Saturday (7:05 pm) and Sunday (2:05 pm).

“This series is a critical time if we want to catch Wichita.”

“We have only one game remaining against Wichita after this weekend so we have to make a dent in their lead in this series.”

“We have been having more puck possession than our opponents in recent games including the last time we played Wichita but we have to do a better job of finishing plays.”

“We can’t beat ourselves like we have in the recent losses. We need to stay aggressive without gambling on low percentage plays.”

“Jake Paterson will get the start in goal tonight but both goalies will play in the series.”

“Collin Shirley (#11) will be in the lineup tonight playing in his first professional game. Shirley is a big body forward who was captain of his team in the WHL.”

“I’m not sure if any of the players listed as day to day will be available tonight but if we play our game we have a good enough lineup to win.”

“Skating coach Luke Chilcott worked with the team for a portion of practice yesterday. Luke has been out with an injury so we haven’t been able to have him at practice. The guys seemed to enjoy what Luke was showing them and asked when he could come back.”

“Some drills Luke works on can have immediate impact in games.”

“It was good to spend time with the season ticket members (STM) at lunch yesterday. Because of COVID I haven’t done that this season. With all of the support we get from STMs I like to share with them information they can’t get anywhere else.”

– The game tonight will be the eighth of 11 games between Allen and Wichita this season.  Allen’s record against Wichita this season is 3-3-1-0. In the most recent meeting (April 20 in Allen) Wichita handily beat the Americans 4-1.

– In the seven head to head games Wichita leads in goals (27-21) but Allen has the lead in shots (253-237). The stats are skewed because of a couple of strange games early in the season. On New Year’s Eve Wichita beat the Americans 7-2 in Allen. The next day in Wichita the American outshot the Thunder 34-12 and won the game 5-1.

– You can make the argument Wichita is the best defensive team in the ECHL. In the odd stat of the day Wichita is ranked #1 in goals allowed per game (2.56) but last (#14) in shots allowed per game (35.69). Great team defense, blocking shots and outstanding goaltending is the difference. Wichita has a team save percentage of .929. No other team is above .916 and Allen is ranked #3 at .913.

– A couple of other stats to keep in mind in this series include shorthanded goals in overtime. Both teams are at the top of the list in shorthanded goals with Wichita ranked #3 with 10 and Allen ranked #4 with eight.

– Scoring the first goal of the game is always important but even more so against Wichita. The Thunder have the best record in the league when they score first (24-4-1-0) compared to Allen with a record of 23-7-1-0.

– A good start is always important but almost a must in this series. Neither team has lost a game in regulation when leading after the first period. Allen’s record is 17-0-2-1 and Wichita’s is 12-0-1-0. A real clear indication a bad start could doom both teams.

– Here is a Matt Harding’s (The Sin Bin) recap of Wichita’s games last week and what is at stake this week against Allen. Good background about Wichita as this three game series against Allen commences. FYI the game on Sunday has a puck drop of 2:05 pm CDT not 4:05 as is in this story: https://thesinbin.net/rolling-thunder-stormin-toward-the-playoffs/

– The AHL allowed each division to decide if they wanted a playoff and playoffs would only take place within a division. The Pacific Division was the only one that voted to have a playoff which didn’t make the PHPA happy. Here is the PHPA official statement: 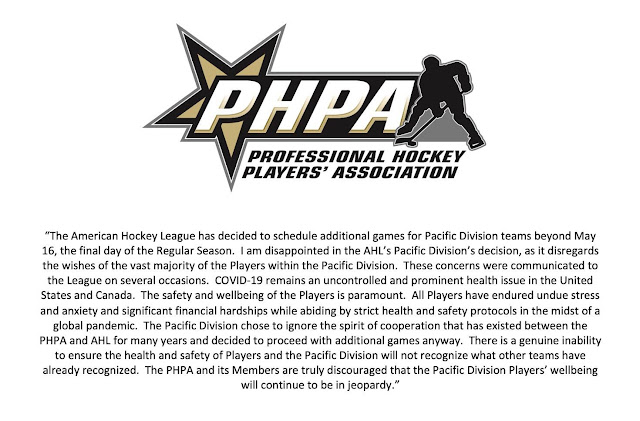 – All seven Western Conference teams are in action tonight. In addition to Wichita at Allen, Utah is at Tulsa, Kansas City is at Rapid City and of course Wheeling is playing Fort Wayne. It is the fifth straight game Wheeling is playing Fort Wayne and they play again tomorrow night. Here is the ECHL Today with a preview of all games scheduled tonight.  https://www.echl.com/en/news/2021/4/echl-today-april-30

DID YOU KNOW: When Collin Shirley takes the ice tonight he will be the 49th player to play for Allen this season. Prior to this season the most players to ever play in a season for Allen was 46 in 2015-16. Here is the ECHL Stats post for today that shows how all ECHL teams compare to last season in players used: